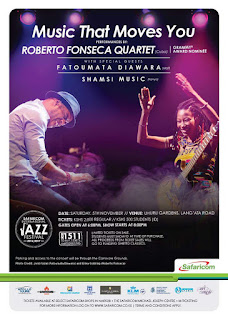 The 2016 November edition of the Safaricom Jazz lounge went down this weekend (5th Nov) and left Jazz fans whet for more.

The Safaricom Jazz lounge is a series smaller events hosted throughout the year aside from, the big annual Festival held sometime in February. It brings both local and International artists to entertain music lovers in Kenya; particularly JazzAholics.

The event; organised in support of Ghetto Classics, did not disappoint. From the ample parking to the tight security and gorgeous lightning, the enormous amount of planning was evident.

Ticket prices were fairly affordable, at 2000/= for adults and 500/= for students. The turnout was good and as they say-the more the merrier.

The security was very tight, there were guys in suits everywhere and somehow I felt intimidated and scared. Why were there so many? There were at least 6 guys at the entrance when I arrived at around 5pm. Well I guess you can never go wrong with security, or can you?

Gates opened at around six pm and by half past eight we were already bobbing our heads to the serenading tunes of Shamsi music. They did a nice rendition if popular gospel artist Mercy Masika’s song ‘Mwema’ with a Shamsi twist. 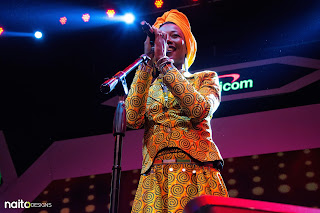 Am not sure about everyone but, I found their 4 keyboards unusual, either way they did justice. The bassist had the broadest smile throughout- and as they say; when the bassist is happy, everyone is. (No one says that, I just invented it;)Lol!

I particularly loved that they had African authentic songs, inspired by nature. A great example being the Elephant song which incorporated elephant sounds in a simplistic and jazzy way. This reminded me of the great Beethoven’s who used to take nature walks in the forest to get inspiration. Good work guys!

Wine, food and drinks were flowing throughout the event and it gave a kind of cozy home feeling where people were able to let loose. There were no funny incidents as far as I know. Everyone just seemed to be having a great time.

Fatoumata diawara from Mali and Roberto Fonseca together with his crew took to stage next. From there, I had such a great time am not sure I can remember the exact details of what happened. 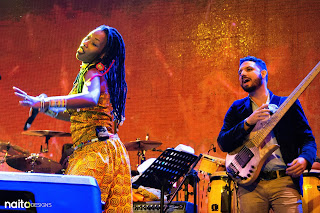 All I remember is Fatou Diawara moving to the tunes and her flawless display of eclectic energy. I haven’t seen anyone move like that in quite a while, it seemed authentic and very passionate.

Roberto Fonseca’s prowess on the keys left the likes of Aaron Rimbui ” magic fingers” proclaiming on the Capital Jazz Club that he had never seen anyone caress the keys like that in quite a while.

His crew, consisting of a Bassist, percussionist and drummer effortlessly showed off their madd skills. Aside from the sporadic onstage signaling to the sound team, the perfomance went on without a glitch. My mind is still in a loop of Fatoumata’s Bibisa.

Aside from the music, the atmosphere was very nice. Safaricom just never seems to go wrong with giveaways. Two Iphones and two Samsung galaxy Batman edition were up for grabs, I even got one month free advantage plus subscription.

Overall, I’d say the event was a success and had a great time and at the same time supported a worthy cost. I look forward to next year in February. Don’t miss! View more comments and Photos

Special thanks to @NaitoreGitonga for the wonderful photos!