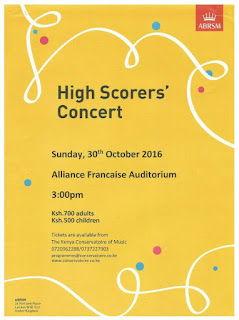 The 2016 edition High Scorers’ ABRSM Concert held at Alliance Francaise went down on the 30th of October and was a success, receiving appraisals mostly from parents, who marked this historical day with their kids.

ABRSM High Scorers’ Concert is organized to put the spotlight on some of the best performers in the ABRSM music exams held annually, ranging from Grade1-8 all the way to Diploma. It is a nice opportunity to let the audience get a feel of what happens in the exam room and also appreciate young talent. The kids also got a taste of what it feels like to perform before an audience and build confidence.

I went to the event with an open mind and being a first timer, I’d say I was not disappointed. The ticket prices were fair at 700/= for adults and 500/= for children. Am sure the turn out would have been preety much the same if they charged 1000/= for adults.

The faces of young musicians and eager parents was heartwarming and even before the event, I knew this was a family event and it was mostly about the memories that would be made on this memorable day.

The event was supposed to start at 3pm but, at around half past two I was sweating my armpits off, in a sea of parents and relatives who, were ready to knock everyone down, just to get good seats as soon as the doors were opened. It made me think about Black Friday in the states. My poor ticket was drenched by the time I was handing it over. 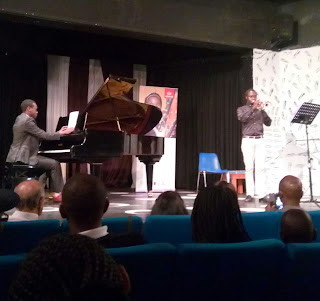 Anything can happen in live performances, especially where kids are involved but, from a broad stand point, the performance was smooth with occasional blips here and there that probably went unnoticed. The kids were obviously prepared and there was no doubt that they were the top scorers. From Piano to violin to singing, I enjoyed seeing young talent from all races and tribes. Music truly bring people together.

I felt bored after a while since most of the grade one graduates were performing the same piece and I think; because of that, people did not appreciate their performances as much. I think the kids should be challenged to play pieces that are not necessarily within the ABRSM song book of the year but, something they are comfortable with and within their level.

Bowing did not seem to be a requirement but, those who did were held in high regard. It looks professional and I think all kids should have done it. They are all performers regardless of whether they were playing a simple Minuet in G or the famous Flight of The Bumblebee by Rimsky Korsakov.  It is also very reassuring when the performer smiles at the audience before the performance and it created the mood before the actual piece was performed.

I would have mentioned all the outstanding performers but, the performance changes were happening so fast and it was hard to check the performance list to see who was performing next when they were already halfway performing their piece. Maybe they should have made brief introductions of what they were going to do. 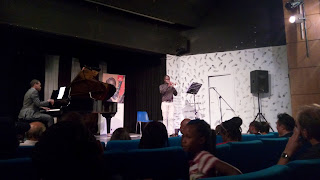 One gentleman who did justice and stole the hearts of many with his extraordinary performance was Stephen the trumpeter; a grade 8 graduate. His performance was exceptional and surely my moneys worth. His pianist had everyone giggling with his awkward page turns; having to lean on one side to read the closing sheet of music but, eventually nailed it with the audience itching for a thunderous clap even before the performance was over.

Overall, the event was a success and it left me itching for more. It is nice to see how classical music is gaining such a foothold in Kenya thanks to the Kenya Conservatoire of Music in Nairobi and other stakeholders. Congratulations to all the 2016 ABRSM graduates, we hope to see you next year for an even better performance.

I wouldn’t do this article justice if I failed to acknowledge the effort of the new director; Corrine Towett who did an awesome job organizing the event, this being her first concert since her new title.

Click to see how Safaricom Jazz Lounge 2016 edition went down.

You have Successfully Subscribed!

MY BOOK IS OUT!

Life Philosophies at 20: Essays on the fundamentals that encompass the young person's life.

Young people cannot be deep thinkers is a myth this book aims to refute. It is an expression of ideas the author feels are important and possibly fundamental. The book breaks down the simple fundamental ideas that encompass the young person from a philosophical perspective It helps give a glimpse of what young people are concerned about as well as to stimulate minds on the right philosophies of approaching life. It is less of a manual and more of a thought trigger that readers are encouraged to argue and critique.