Its All about You

Ever had done of those personal experiences that just take a huge toll on you and afterwards you feel once bitten twice shy? Believe it or not but those depressing instances make you stronger than you can fathom, maybe not physically but, mentally. Its like you just attended life’s lesson and the lecturer was a no nonsense guy but, when you walked out that room; wisdom was oozing from all ends and its aura suffocating.

I just want you to ask yourself a simple question, what’s that one person- in that so called life of yours –that’s totally reliable to you, that one person on this earth who you will walk to and will never turn their back, that person who always agrees with you and is never far from you? Its simple,You!

Think about it, this world is here for you and for you only; arguable? Yes! but wait. I want to take a couple of examples to illustrate how whenever anyone does something and says there doing it for someone, its because there is something in it for them otherwise it would have never crossed their mind in the first place. 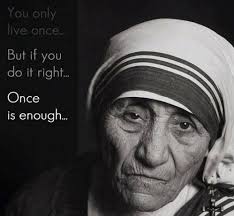 Who doesn’t know Mother Teresa, a symbol of ultimate self-sacrifice and humility, her selfless acts have not only mapped the 2nd most populous country in the world but, have lived on 18 years later since she passed on. She lived a life many today rarely dream of, a life of sacrificing the little you have for the sake of the less fortunate and ended up winning the most prestigious award on earth.
So what am I driving to, this selfless lady with a heart full of love, formulated this idea that must have been sparked by something within her; probably genes, upbringing or even a higher power otherwise, this world would be full of mother Teresa’s.
She had an urge and a desire to help others and am sure when she did it, she felt something, something that drove her to her next mission.

Hey!, remember this other awesome lady; The Late Wangari Maathai, am sure a nobel peace prize is coming to mind right now and am also positive that if you has asked her when she had just began advocating for a clean environment it was not about the international awards or the publicity.
She did not succeed because she had a bunch of ideas pinned up on her dream board or because it was a niche in her neighborhood and someone had to do it eventually, No. She made it because it started from within and all other factors, like doing it for the people came afterwards. Today, try doing what she did and there is a very high chance you will fail because it might not be from within. She had a drive, a dream and passion to do what she did and that was a priceless asset to her.

Am not saying that these amazing people were selfless, am saying that they were true to themselves and they listened to that inner voice which drove them to do the great things they did. Afterward, i can assure you that the feeling of joy and happiness they felt inside was just incredible and priceless. Sure, when you are called for a TV interview you might say, I did for the people but, being true to yourself means that seeing people happy made you feel happy and satisfied and that’s what us humans thrive on.

I could give you dozens of examples but, the important thing I want you to learn is that, in anything that you do, at the back of your mind you should know the real reason why you are doing it. With this in mind all other things come second. So don’t hop a business idea or an idea to change the world just because someone has to do it or you will make a decent living out of it, follow your heart and just learn to listen. Everyone is unique and as long as you can dream, have drive and be passionate about something, that’s your asset and be proud about it. There’s no limit!

Changing Habits for the New Year.